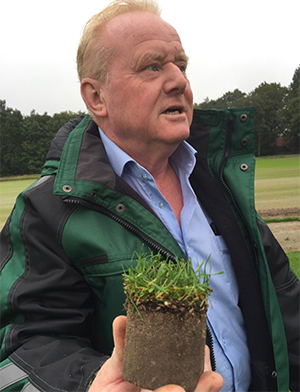 You were a tower of strength
Flew as straight as an arrow
Defied storms and waves
And in the end... the wind stopped having your back...

An icon in the field of grass has been taken from us!

With sadness, but also with great pride for what he has accomplished and meant for so many, we inform you of the passing of Mr John Hendriks.

John passed away in the warm presence of his family on 16 June 2020 after a short illness at the young age of 65.

John was the founder of Hendriks Graszoden, which he managed together with his three brothers. Brothers Wil (2012) and Thijs (2017) had already been taken from us. In 45 years, together with his brother, John created a company that is one of the world's top natural-turf companies.

John had grass running in his veins. His dedication, drive and enthusiasm motivated everyone he met in this industry, in both Europe, Russia, Iran and countless other countries in the world. And he strove towards perfect quality and prompt service in the process.

Hendriks Graszoden started out with the delivery of small rolls to the private market, but turned into a market leader in the delivery of large rolls to the professional market. From its starting point in the Amsterdam Arena, he took his turf, but especially his extensive knowledge about pasturage, to countries all over the world. It turned him into a national and international figurehead of the stadium world. Dozens of stadiums have been provided with Hendriks Graszoden's sportturf. John was incredibly proud of this.

He continued to work ambitiously on his achievement with great passion, vision and a steadfast direction. He was not yet done. His mind was filled with plans and ideas, with the 'green living grass' as the central theme.

John guided the company through countless changes and managed, thanks to the expertise of his brothers, to always anticipate market fluctuations and changing methods and systems for the growing, harvesting and installation of the natural turf.

He was also very much a committed personality, who liked to be among people. He might have been the director of the company, but he acted like a colleague. Listening to his customers, his employees, and also to the market made him a highly respected and appreciated 'ambassador of the green grass' both nationally and internationally. He considered navigating the wide-ranging cultures of Europe, Russia, Iran, Iraq, Uzbekistan, etc. a special challenge. Driven by his ambition and his knowledge, he travelled around the world and found new challenges in every country. For instance, he can be considered the founder of a new stadium and training complex in Tashkent, Uzbekistan.

He cared about his environment, and he provided guidance, clarity, motivation, education, stimulation and humour to his employees. But above all, he was down to earth and practical.

John was a social man, had a clear opinion on matters, but was always dedicated to the company of which he was so proud. But first and foremost, he was a proud and loving husband to Galina and father to Nicole; his foundation and source of warmth and love.

We will miss John as a respected and strong person.

John took up an important place in the family and leaves behind a void.

We gratefully remember his drive, presence, knowledge and experience.

And he gave us more than enough to further build on his legacy, which is continued by Erik Hendriks and the personnel.

The management and employees of Hendriks Graszoden BV